A remarkably frank book written by the most innovative, and arguably the most important, weightlifter in history. If you’d like to know why and how he did it, this is the book for you

I loved the book as a whole, it was amazing to read about all theses things that have happened in his time, and I was about to learn how he got the means to how he trains. (My Teacher asked me "What lexile it was")

R
Ryan
Awesome book , must read for any westside fan ☝🏼

Great book , lots of great Stories like listening to louies podcasts but in a book form , 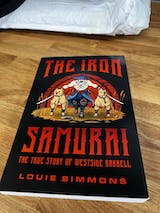 Thank You and will due my part to keep the greatness of Louie Simmons Alive!!!