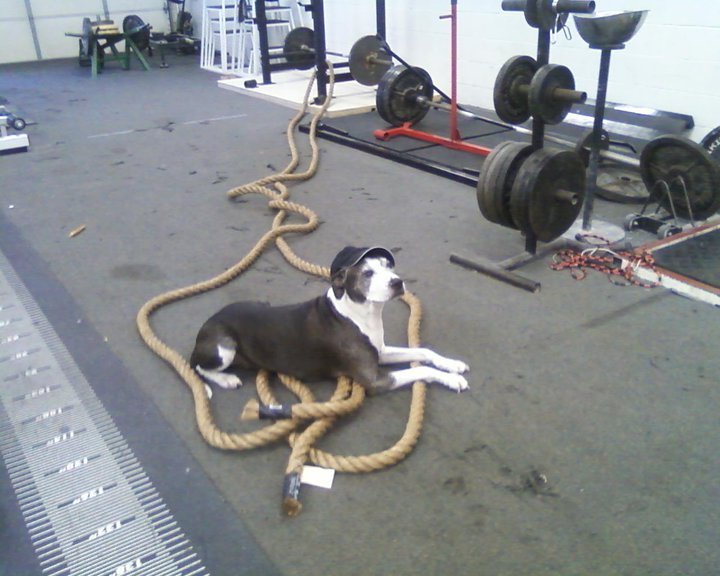 I am fascinated whenever my pit bull, Jackie, chases his tail. Round and round he goes, going nowhere fast, until he finally realizes he’s right back where he started. But I will give him credit; at least he knows he’s going nowhere fast.

My dog attended obedience school for 4 weeks, so maybe he has an advantage over his human counterparts, i.e., those Ph.D.s in exercise physiology in schools that are still teaching progressive gradual overload. I recently read an article by a U.S. Ph.D. He described a yearly plan consisting of four phases. The first phase is designed to increase muscle mass, i.e., hypertrophy, and to increase the training base.

A point that must be made is that after the end of phase 1, in as little as 2 weeks, your muscle size will start to diminish, by 10-15% causing, in a sense, a detraining effect. The stronger the lifter, the faster this will happen.

For example, work your lats or abs intensely for 2 or 3 weeks. This does not make much sense to me, and I hope it doesn’t make sense to you either.

Raising muscle mass, if that is the goal, or raising GPP is not only a yearly goal but a multi-year goal. It can be accomplished by incorporating a dynamic day, on which just one of a variety of special strengths is refined, and a maximal effort day that occurs 72 hours later using several set of well-thought-out exercises for the particular muscle groups that need strengthening. This can also be accomplished by doing extra workouts during the week.

For max strength, weights from 30 to 100%+ of a 1 rep max are used, which causes a restricted blood supply, resulting in a hard muscle contraction, thus providing a strength gain. The extra workouts that use weight or resistance less than 30% will effect restoration by increasing circulation. Ten extra workouts a week is a normal load. Doing special exercises for the classical lifts will increase you strength and perfect form. Concentrate on only the muscle groups that aid in raising the lift or total. For example, don’t squat, but do special exercises for squatting, such as glute/ham raises, pull-throughs, Reverse Hyper®5356,359 and 6,491,607b2, or belt squat, plus ab work. Also do exercises for flexibility.

In place of benching, do triceps extensions with a bar, dumbbells, or bands, delt raises, lats, upper lock, and external rotation work. With this method, one never stops building muscle mass. Switch exercises that work the same muscles (the conjugate method). This will allow one to constantly build muscle mass, GPP, and SPP.

According to the article I was reading, phase 2 is the precompetitive phase, normally lasting. The Ph.D. now states one must raise top strength, or absolute trength. During this phase the lifter concerns himself with raising his squat, deadlift, and bench press using all major exercises, rack work, good mornings, etc.

Let’s look at an alternative method: the maximal effort method. This incorporates the conjugate method: using special exercises that closely resemble the classical lifts. Examples are squatting with special devices, such as the MantaRay or cambered bar, concentric work, good mornings, or deadlifts using the contrast or reactive method. The weights are always100% plus, depending on your level of preparedness, i.e., how close one is to top lifting form, which incidentally should never drop below 90% of your all-time records.

The maximal effort method is calculated much like the Bulgarian system, meaning always doing the most possible, even when far from contest time. As you can clearly see, this method allows you to lift you current max every week of the year, not just for a few weeks near one or two contests during the year.

What about Absolute Strength?

Well, so far the Ph.D.s from the U.S. advocate building muscle mass, then allowing it to disappear after ceasing the hypertrophy phase. This is not training, but detraining. The same happens after phase 2. The Westside method, however allows one to become larger and more muscular and stronger all year long.
The Ph.D.’s classes are now learning phase 3, for explosive strength. This phase again lasts about 6 weeks. For this phase the main goal is to increase bar speed. The weight here reaches 60-85% of a 1 rep max, and they add plyometrics. Then they move into the peaking or contest phase. Here they recommend going from high reps, light weights or high volume, low intensity to heavy weights, low reps, which results in lower volume, but high intensity.

Controlling volume and intensity is very important. When one does sets with 70, 75, 80 and then 85% for doubles, it is impossible for the lifter to understand what task is the goal. How do you determine if you are lifting with the same effectiveness at each percentage? If the weights are moving at the same max rate of acceleration, all is well. But when the weights are raised that high, this is not possible. Rule of thumb: train at intensities of 60%, 70%, 80%, or 90-100%+. Prilepin’s studies of more than 100 Olympic, National, and European champions showed that there is an optimal number of reps at certain percent ranges. If one uses one percent per work-out, the task is easier to realize. Lighter weights are used for explosive and speed strength (60-80%) and weights of 90% or more for strength speed. It is not advisable to train for two types of strength in one workout.

Here’s how it is done. For speed strength, use a pendulum wave. During week 1, us 60% for multiple sets: 1 rep pulls, 2 reps for the squat, and 3 reps in the bench. Week 2: 65%. Week 3: 70%. Then drop back to 60% on week 4 and 65% on week 5. Use 70% on week 6. Then drop back down again. This is a pendulum wave. This kind of wave is used because on cannot increase in speed or top strength after 3 weeks of increasing the weight. If one continues to increase the weight, the bar speed will suffer dramatically, which must not happen.

What about absolute strength? Three days separate the dynamic workout and the max effort day. This is because the major muscle groups recuperate in 72 hours. The max effort workout is performed with the conjugate method. This allows one to lift weights of 100%+ each week. This is possible by switching exercises each week.

This method of training allows one to work on weak areas often overlooked by doing the classical lifts. It will also perfect form and coordination. This type of training also allows one to perform extra workouts for strength, restoration and flexibility.

One cannot succeed by doing only the classical lifts. One will cease to make progress. The greater the lifter, the more tasks you need to stimulate progress.

Progressive gradual overload accomplishes only one goal at a time, while actually detraining the phase you just completed in as fast as 2 or 3 weeks. In addition, after a contest you must start over exactly where you started. But the system Westside has adapted from the old Soviet system allows you to build muscle mass, speed, and absolute strength, perfect form, raise you GPP, increase you flexibility, and provides restoration all year long, year after year. WE raise all qualities gradually, never neglecting one for another.