The Conjugate System is the new "Hot" word when it comes to training systems right now.

However, due to lack referencing, widely varyings opinions (mostly Incorrect) on implementing this style of training, and a crazy surge in social media savvy strength coaches there is a disconnect between Westside Barbell and the system that Louie Simmons could be credited with revolutionizing or at the very least popularizing for the modern day coach and athlete.

Louie has been writing about this system for over 30 years. Every year it refines and updates and we try to put out as much free content as possible.

Draw your own opinions from the source not from a third party.

Take a look at this article published in 2010. 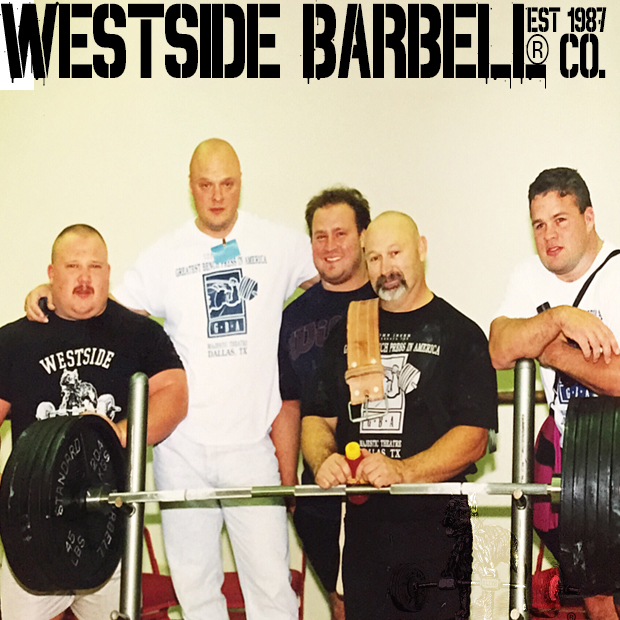 How Was It Developed?

Many have asked how Westside developed the conjugate system and why. I started training full time in powerlifting in late 1969 after returning from the army. I had my first power meet in 1966. What an experience! I lifted along with four future world champions: Milt McKinney, George Crawford, who gave me countless tips on squatting, Larry Pacifico, and Vince Anello, who was the deadlifting machine. I asked Vince what helped his deadlift. His reply, “everything helps my deadlift.” It sounded vague, but Vince was using the conjugate system, although it was unnamed. George was the squat king. His training was a combination of regular squats, box squats, old Westside style (meaning Culver City, CA, style), rack squats, and good mornings, which contributed to his success. This is the conjugate system, a system of unidirectional loading that was designed to enable him to squat more. Larry Pacifico, who was a renowned powerlifter in the 1970s and early 1980s was great at everything, but his bench was unreal. His bench training was a combination of heavy-duty bodybuilding and lots of triceps work. Larry told me that 75% of our bench success was from the triceps.

With their advice, which they gave me freely at meets, and following the methodologies of the Culver City Westside group, I came up with the Westside conjugate system. Bill “Peanuts” West was the founder of the Culver City Westside Barbell Club. George Frenn was a world record holder in powerlifting and in the 56-pound weight throw. They had countless special exercises such as rack pulls, box pulls, high pulls, good mornings, box squatting on at least three different height boxes, benching with rubber mats on the chest, floor pressing, rack lockouts, and so forth. Their rotation of exercises was space-age at the time, which was 1965 to the early 1970s. The system was the conjugate sequence system, although it was not named yet. The training I was doing at the time was influenced by everyone mentioned above.

The only true problem I had was the loading. There were no Soviet secrets being leaked to the United States at that time. The progressive gradual overload system was being used in the U.S. It was divided into different time periods, or blocks, designed to work on a specific element of training. I am amazed that lifters are still using it today. It’s a dead-end street. The young lifters believe it’s a new from of periodization. Maybe they think the push button starters on some new cars are also new, but all cars had a starter button in the 1940s. I was always stronger a week or two after a meet or a week or two before the meet, but very seldom on meet day. The Soviets had coaches, like Matveyev, who realized there was a much better method of planning. There has always been controversy over who came up with wave periodization. Dr. Yuri Verkhoshansky has been credited with the pendulum wave . This was in 1964. Even the renowned Bulgarian coach Abadjieve had a similar plan for waving volume and intensities.

In 1972, the Dynamo Club had 70 highly qualified weight lifters do an experiment by rotating 25-45 special exercises including the classical lifts. After the experiments were done, one lifter was satisfied and the rest wanted more. It now had a name: the conjugate system. I was training alone and used lots of special exercises for all three lifts to reduce staleness. When you use the same routine over and over, you fail to make progress. This is known as accommodation. To avoid this, a rotation of exercises small and large must be cycled in and out of the plan. I followed this system without knowing it had a name for years, 13 years to be exact.

Broke My Back, AGAIN!

It was in 1983 when I broke my lower back for the second time. I thought there had to be a better way. I started to buy books such as the Soviet Sports Review,translated by Dr. Yessis, and the Soviet training manuals that Bud Charniga Jr. had translated. Bud told me that these are textbooks. This is just what I was looking for. They opened my eyes. They are very math/physics oriented, with a basis on Newton’s laws of motion. I was hooked. I had totaled my first Elite U.S.P.F. total of 1655 in February 1973. I used no gear, not even wraps on my knees or elbows or even wrists, just an Olympic weight belt, no power belt. If I wanted to continue to make progress, I had to get stronger and I had to get smarter, much smarter. I started all over. First I used the pendulum wave in 3-week cycles, going from training a heavy and a light day, to a max effort day, working to a max single depending on my level of preparedness. A severe workout can be done every 72 hours, and the second day is devoted to the development of special strengths. It could be explosive strength, commonly known as the dynamic method.

The Westside conjugate system is the best of two advanced training systems: the Soviet system, where several special exercises are used to advance the training of superior lifters and athletes, and the Bulgarian system, where near-max lifts are performed every workout. The Westside system is a combination of the two.

Science has proven that training at a 90% or above for 3 weeks will cause physical and mental fatigue. With the Westside conjugate method we switch a core barbell exercise each week to avoid accommodation. The wide variety of special exercises will perfect form. The similarities of the Westside conjugate system to the one devised by the Soviets at the Dynamo Club are obvious. The only difference is the exercises: one system for Olympic lifting and of course the other for powerlifting. What I took from the Soviets was the sequence of wave loading. A. S. Prilepin was instrumental in regulating the number of repetitions and sets at a particular intensity zone. This truly enlightened me about the importance of calculating volume at each intensity zone and why it is a waste of time to do too many reps at a given intensity zone. Men such as Verkhoshansky, Bondarchuk, Matveyev, Vorobyev, and many more helped lead the way.

Westside pendulum wave cycles last 3 weeks for speed and explosive strength and 2 weeks for strength speed work and utilize several special bars with which to establish different maxes. But because the reps and sets should remain the same at a given percent, the bar speed at this percent will remain the same. The volume will be different each week due to the difference between bar maxes. Your front squat max will be different from your safety squat bar max, and of course both will be different from your max squat. This is to avoid accommodation, which in this case is the constant overuse of the same loading patterns. The Soviets and Westside count only all-time records, which amounts to roughly 600 lifts a year, similar to contest max lifts. The Bulgarian system mandated that the current training maxes were based on that particular day’s strength, equaling about 4000 lifts a year. They were not based on a certain percent. This was determined by Coach Abadieve’s experiments. They used only six lifts: front squat, back squat, power clean, power snatch, clean and jerk, and snatch. One had to be well chosen for such a rigorous regiment of training. Westside’s system is to max out on this day according to your level of preparedness. This means that a Westside max effort is the most one is capable of that day. It may not be an all-time record, but it is the most you are capable of on that day, week after week. This is just like the Bulgarian training with the exception of the number of lifts. They would follow this system 6 days a week. Six maximum lifts were done in the morning. After a 30-minute rest 6 more maxes on pulling exercises plus 6 max squats, front or back. This was repeated in the afternoon and evening.

Westside uses two max effort days a week, one for the squat and deadlift and one for benching; 72 hours separate a speed workout and max effort day for the same lift. Three lifts at 90% and above are advised. This is more practical for powerlifting, on the basis of using this max effort system for the last 26 years.

I hope this explains how the Westside conjugate system was created. I found the right way to train by observing the smart and resourceful lifters who succeeded compared to those who set their own plan and failed and withdrew from Westside. Tags: Triceps, Back, GPP The bench press is one of the more complex powerlifting movements. It...